1 Power Harassment in the Workplace 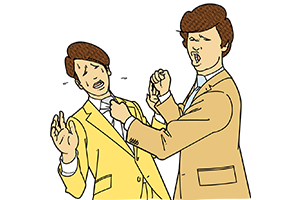 １．What Is Power Harassment in the Workplace?

The revised Act on Comprehensive Promotion of Labor Policies requires employers to take measures to prevent power harassment in the workplace. The Act also prohibits employers from subjecting workers to disadvantageous treatment for seeking consultation regarding power harassment.

（Employment Management Measures, etc.）
Article 30-2 Employers shall establish necessary systems for responding to and appropriately handling consultation from workers and othernecessary employment measurestoensure that the working environment of the workers they employ is not harmed by language and behavior based on power relationships which exceed the necessary and reasonable scope of work duties.
(ii) Employersshall not dismiss or otherwise treat a worker disadvantageously on the grounds that the worker has engaged in consultation as set forth in the preceding paragraph or has stated facts when cooperating with the response to said consultation.

Power harassment in the workplace is defined as acts thatmeet all of the three following criteria.
(1) Language or behavior, delivered from a position of power, which
(2) exceeds the necessary and reasonable scope of work duties, and is
(3) detrimental to the working environment of the worker
Appropriate work instructions and guidance that can objectively be considered necessary and reasonable in order to perform work duties are not considered power harassment in the workplace.

What Is a “Workplace”?

A "workplace" refers to any location where workers employed by an employer perform their work, even if it is a location other than that where a worker normally performs their duties.
Social gatherings outside of work hours as well as interactions in employee dormitories or during the commute to and from work, which are effectively considered an extension of work duties, are also considered to be the "workplace." However, it is necessary to judge cases on an individual basis considering the relevance to duties, the participants, and whether the participation or action in question is compulsory or voluntary.

"Worker" refers to all persons employed by the employer, and includes not only permanent (non-fixed term) workers but also non-regular workers such as part-time workers and contract employees.
Regarding temporary employees dispatched to a workplace by a dispatch agency, in addition to the owner of the dispatch agency the owner of the workplace to which the worker is dispatched (client business owner) must provide identical measures for dispatched workers as for workers they employ directly.

２．Power Harassment in the Workplace - Details

Power harassment in the workplace refers to harassment that meets all of criteria (1) to (3) below. It does not include appropriate work instructions and guidance that can objectively be considered necessary and reasonable in order to perform work duties.

(1) What Is Language or Behavior “Delivered from a Position of Power”?

・Language or behavior by a person of a higher rank in the workplace
・Language or behavior by a colleague or subordinate, where the alleged perpetrator possesses the necessary knowledge and abundant experience required to complete the job, making it difficult to perform the task smoothly without their cooperation.
・Actions by a group of colleagues or subordinates which are difficult to resist or reject.

(2) What Does “Exceeds the Necessary and Reasonable Scope of Work Duties” Mean?

When viewed against socially accepted norms, the language or behavior in question is clearly unnecessary in order to perform work duties for the employer concerned, or unreasonable given the context of the situation.

In doing so, it should be noted that in cases where the behavior of the worker is an issue, the question of whether the manner in which instruction or reprimand is given to the worker is proportional to the nature and degree of the problematic behavior is an important factor. Even in cases where the worker displayed problematic behavior, if the other party involved exceeds the necessary and reasonable scope of work duties in responding, such as using language or behavior that denies the worker's human dignity, this can naturally be considered power harassment in the workplace.

* “Attributes”: E.g., Age, length of service, disabilities, nationality
“Physical and mental condition”: E.g., Whether the worker has a physical or mental illness

(3) What Does “Detrimental to the Working Environment” Mean?

・In judging whether an individual case constitutes power harassment, the matter should be considered from an all-round perspective, including a comprehensive review of the items in (2) above as well as the degree of physical or mental distress suffered by the worker as a result of the language or behavior in question.

・Paying due consideration to these factors, work to implement an appropriate process of measures spanning prevention to countermeasures against recurrence.

Key points regarding measures that employers are required to implement under guidelines.

The measures thatemployersshould take to prevent power harassment in the workplace by workers they employ or by the employers themselves (or officers in the case of a corporation)are as follows.

*Employers must implement these measures without fail.